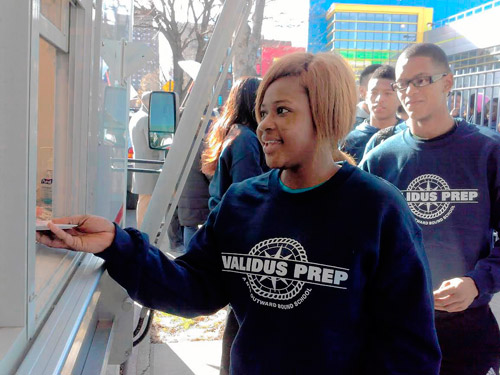 Located at 1595 Bathgate Avenue, the high school’s college-bound students participated in an annual march outside the campus as their underclassmen cheered and waved homemade signs congratulating them.

“The College March is a movement,” expressed Christopher Hibbert, principal at Validus Preparatory Academy. “This march is a powerful symbol in that every student is able to achieve success, regardless of his or her background or circumstances. Most of our seniors marching today are the first in their family to attend college and come from families were English is a second language.”

The College March originated in 2011 at WHEELS, a public school in the NYC Outward Bound Schools’ network with assistance from Capital One Bank and spread to other high schools the following year.

President Barack Obama officially recognized the National College March during his 2014 State of the Union address.

According to Hibbert, Validus was welcomed into the program’s fold last year.

The annual event saw over 60 seniors walk from their campus to a postal service van parked nearby.

With applications in hand the students delivered their letters to postal workers inside the van; ensuring their college applications would be received in time to meet critical deadlines.

“I am extremely proud of the way it unfolded,” revealed Carmen Shell, NYC Outward Bound Schools admissions coordinator. “The students seemed to be excited and looking forward to their future. ”

Afterwards, students entered the school for the College March Town Hall closing ceremony. Hibbert served as the meeting’s emcee and congratulated the class of 2015 in the opening speech.

“You can be standing on stage like I am today in a few years, and let me remind you that no one can tell you that your dreams are not possible,” stated Gibson.

“Watching you guys march overwhelmed me,” expressed Schnapper. “I am so happy to be here and we’re really excited to be behind Validus and the other schools doing this march today. ”

Class of 2015 speakers took to the stage in addressing their peers, teachers, faculty, staff, and school administration on the march’s significance as well as to give them thanks for their future success.

Student speakers Greicy Wong, Johnson Agyapong, and Mary Appiah were eager to express what the National College March meant to them.

“I’m so proud of myself because during my four years in high school, I’ve worked very hard and I’m really trying to prove myself to the younger ones who will see me as a role model,” said Appiah.

“It feels rewarding because after all of the hard work that we’ve put into this, it’s finally paying off,” Wong said.

“I feel accomplished because I’m almost out of high school and now applying for college,” Agyapong said. “It’s a great feeling.”