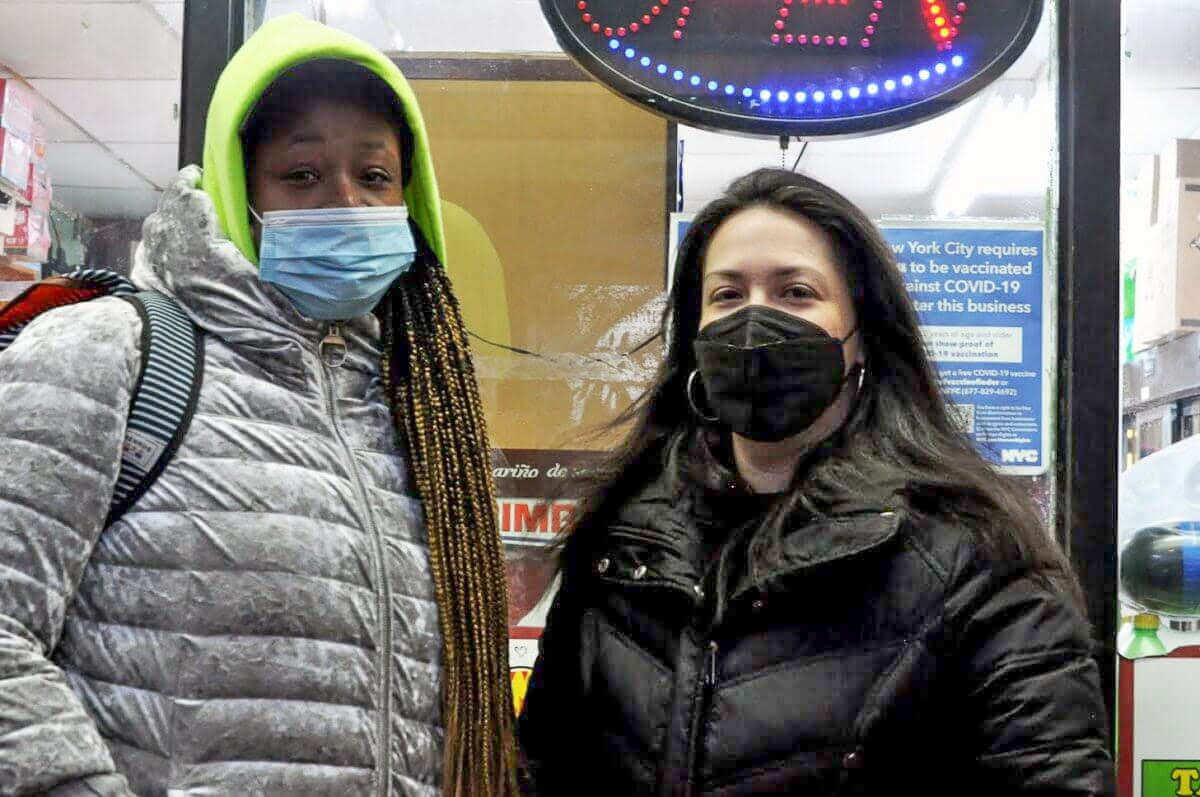 On Jan. 9, the Twin Parks North West building caught on fire caused by a faulty space heater in a third-floor unit. The blaze left many in mourning for the 17 people whose lives were lost, including eight children. More than 300 people and 150 families were impacted. Some have remained in the building, while others were relocated to hotels and motels. Many, though, are now feeling abandoned and forgotten as they wait for news coming from the mayor’s office about financial support.

But the Bronx Times has just received information from the mayor’s office that could shed more light on the situation.

There is currently $3.5 million in the Mayor’s Fund to Advance New York City earmarked for the Bronx Fire Relief Fund — a total of $4.4 million was raised over the last two months, according to the mayor’s office. Roughly $900,000 has been spent on food contracts, burial services, airplane flights and cash assistance, including $265,500 in gift cards to 118 households.

The remaining funds, 100% of which Mayor Eric Adams has said would go to impacted families, will be dispersed over the course of one year for housing, food services, childcare and other government services, the mayor’s office told the Bronx Times on March 10.

The Bronx Times filed multiple FOIL requests with the mayor’s office on March 5 about the Bronx Fire Relief Fund and contracts between the city and relief aid service providers.

Ran from fire, only to chase after help

Yadhira Rodriguez, one of the individuals impacted by the Twin Parks fire, just gave birth to a little boy. The last thing she wanted to do was continue hounding her local electeds — even Senate Majority Leader Chuck Schumer — about when the funds would be distributed to families affected by the January blaze.

“They’re micromanaging everything,” Rodriguez said. “In the name of Jesus, what’s going on? That’s what we want to know.”

Rodriguez is one of the individuals the Bronx Times spoke to about their displacement, the quality of the support from nonprofits and the city, and their current lodging situation. All of them agreed on one thing: There are millions of donated dollars meant for them, but this isn’t translating into their current lived realities.

They raced against flames engulfing their home, down flights of stairs, but the horror didn’t stop there.

Rodriguez and her family found bed bugs in their mattresses and suffered from bites at the hotel they were placed in after surviving the Twin Parks fire. Now, she’s even more concerned about the lack of transparency and organization around the mayor’s fund for the Bronx fire relief efforts.

“I need to understand it, and someone to explain it to me like I’m a five-year-old kid,” Rodriguez said.

Ariadna Phillips, a lead organizer for the South Bronx Mutual Aid and public school teacher, has scrambled to meet with families affected by the fire and coordinate food deliveries and donations. She was flabbergasted after learning the food delivery for the impacted families ceased, seemingly without warning on Feb. 28.

“We thought it was a glitch,” Phillips said. “Then we realized no one else was coming.”

She, like many engaged with on-the-ground mutual aid, drew a blank when asked about the mayor’s Bronx Fire Relief Fund.

“Families are upset wondering where the mayor’s fund money is,” Phillips said.

The most recent update the mayor’s office shared publicly about the amount raised for the Bronx Fire Relief Fund was on Jan. 19. At that time, it was $2.5 million.

Meanwhile, nonprofits have stepped in to respond to emergency needs. The Muslim Community Network raised $240,000 and distributed checks to families based on household size on March 4. The Global Empowerment Mission raised $125,000 in gift cards for short-term emergency essentials. The Salvation Army of Greater New York has raised $40,000 in its Bronx Fire Relief Fund, the Staten Islander reported on Feb. 9.

Tusha Diaz, who was part of Adams’ transition team and listed as a “lead chaplain” by New York State Chaplain Task Force on Jan. 10, has also been on the ground. Diaz has been attempting to organize tenants into an association. Diaz said she knows the mayor’s office has a “very structured” plan for the relief funds.

“I do know that there is something that’s coming down the line that’s going to be very beneficial for the families,” Diaz told the Bronx Times.

Chanasia Hunter grew up at the Twin Parks and attended M.S. 391, which sits next door to the apartment complex. She’s excited for her 33rd birthday this week, but wasn’t expecting to be celebrating it at The Alden motel on Webster Avenue in the Bronx, displaced with her family from the place she once knew and loved.

“Now you have people living in hotels with no stove and oven, or microwave, by the way,” Hunter said. “It’s just mind-blowing to me.”

Hunter doesn’t plan on returning back to Twin Parks.

“My mom lived in the building and I came back to help her because she has sciatica,” Hunter said. “Right now we are waiting to see if I get approved for CVR because I wasn’t on the lease.”

CVR New York was assigned by the state to assist families with housing relocation.


The Gambian Youth Organization, which raised more than $1 million for relief efforts, has been “getting to everyone,” said Phillips, in response to suspicions that donations are being prioritized for only some groups of people. “Groups we know have been helping everyone, and in no way excluding one group or another.”

Hunter said her mother received gift cards and donations like toothpaste and deodorant from the Gambian Youth Organization, a nonprofit heavily involved since the day of the fire. Hunter herself has received $450 from BronxWorks, a nonprofit contracted out by the city that received $1 million from the state, as well as $400 from another organization. She’ll be able to get more from the Muslim Community Network, as a secondary family member of a leaseholder.

“Secondary family members who are not on the (apartment) lease would also receive the same funding (as leaseholders) based on household size,” said AjiFanta Marenah, a program coordinator at the Muslim Community Network.

More than 100 families are spread out across roughly seven motels and hotels. People are spread out mostly over the Bronx, as well as in upper Manhattan at The Alden, Aloft in Harlem, Roadway Inn, Residence Inn by Marriott, and Ramada by Wyndham Bronx, according to Phillips, of the South Bronx Mutual Aid.

Families have experienced bed bugs at both The Alden and Roadway Inn, also on Webster Avenue, according to affected families and advocates. In a panic to find new lodgings, Rodriguez and Diaz both called the Red Cross. The city’s Department of Housing Preservation and Development (HPD) took over shortly after. Rodriguez and her family, including her baby, are now in an Airbnb in the Bronx.

“The Red Cross told us that they are only basically responsible for two nights of shelter,” Rodriguez said. “We were transferred by this (HPD) agent to another hotel. We all were affected by bedbugs. You know, it was a whole situation.”

“Turns out five days later, the Red Cross said that they were not gonna pay (and) the hotel they were at is free of bedbugs,” Diaz said, adding that two families turned down the offer and that because of Diaz, they were “going through a lot of stress.”

“I stepped away, because they made a complaint against me,” Diaz added.

To fill in the gaps, the South Bronx Mutual Aid scrambled to create a food plan. Even after Bronx Borough President Vanessa Gibson announced a new initiative on March 3, to provide temporary food service, Phillips sent the Bronx Times visual evidence of boxes of food on the ground — against state regulations — at The Alden and Best Western hotels.

In shock over the disorganization, the group sent a letter to the Bronx Borough President’s Office, pointing out that “unlabeled meals continued to be delivered and old meals were left out, which resulted in hundreds of unlabeled meals” not being properly distributed. South Bronx Mutual Aid had been informed that the meals were part of the contract between the borough president’s office and several service vendors.

Gibson confirmed on March 3 that “hotel stays have also been extended until April 7th, for additional time for families to transition to permanent housing.”

Diaz, of the Latino Muslims of New York, said she and Dr. Bola Omotosho, who chairs Bronx Community Board 5, planned to create a tenants association to provide impacted families “an outlet where they could get all the information.” Before the city distributes the rest of the Bronx Fire Relief fund, Diaz said she would reach out to tenants to raise awareness.

“The families have appointed me to represent them,” Diaz said. “They want me to continue to help them and get the services and give them information and advocate for them.”

Diaz wished to clear the air about her affiliations that some activists and tenants have expressed to her.

“As much as we’ve been doing, we have not asked for donations,” said Diaz, speaking for the Latino Muslims of New York. “No one has given us anything. I don’t think that any organization should stay with a dime (that’s) for these families.”

While some individuals have been relocated to lodgings that better suit their arrangements — like one family the Bronx Times interviewed whose Section 8 status was “bumped to emergency” and placed in a residential building — others anxiously await their futures.

Rodriguez, with her newborn in tow, would like to stay in the Bronx, particularly in the Pelham Parkway neighborhood where her son attends school. She’s figured out that there are still some barriers to being permanently resettled.

“I’ve been asking for a list of landlords,” said Rodriguez, who hopes she and her family can be resettled soon. “Yes, CVR finally provided it. But it’s just buildings with a waiting list. Who wants to go on a waiting list?”

Correction: This story was updated on March 30, at 8:35 p.m., to reflect that BronxWorks says it did not receive $2 million from the state for relief efforts. According to BronxWorks representatives, the organization only received $1 million in funding.