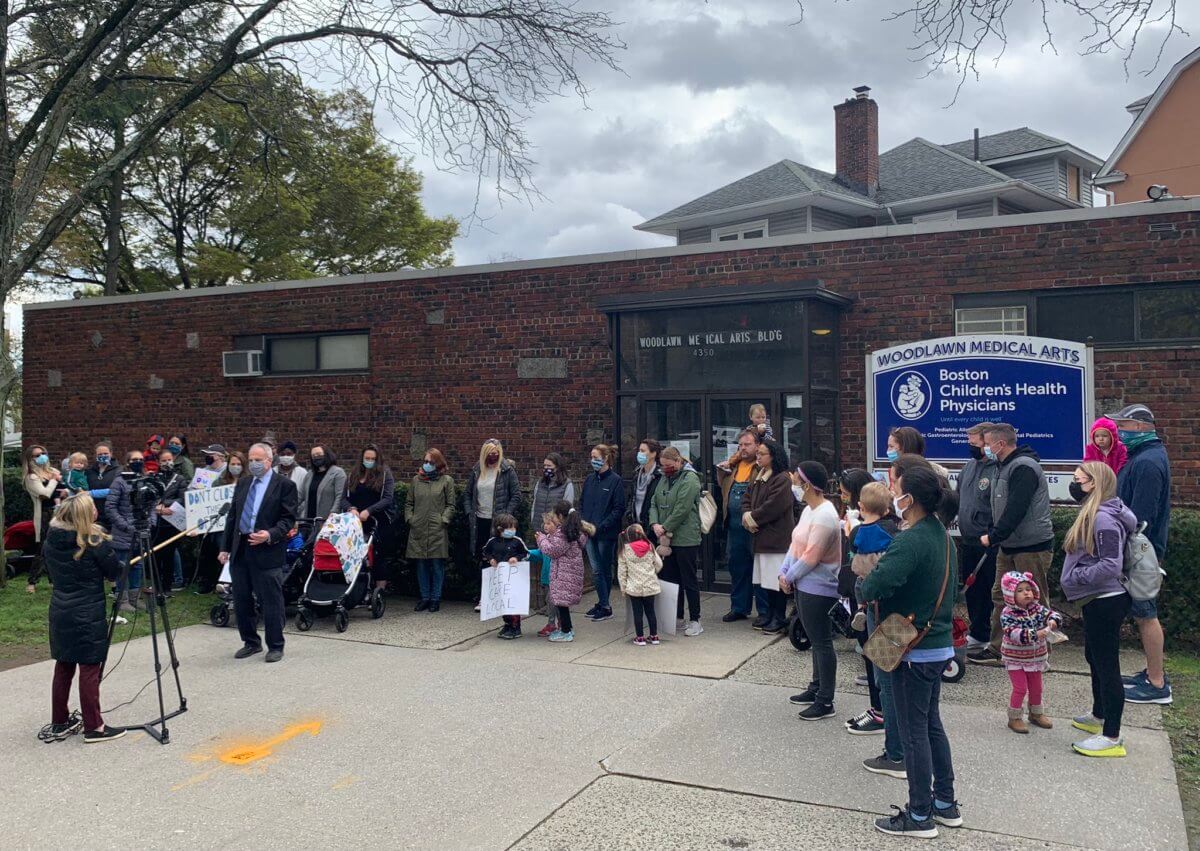 As Bronxites are slowly recovering from the pandemic and getting vaccinated, Woodlawn residents received a bombshell last month that has shaken the community.

On March 15, Boston Children’s Health Physicians announced that General Pediatrics at Woodlawn, 4350 Van Cortlandt Park E., would be shuttering its doors April 30. It has been there for about 15 years and as many as 200 families will now have to find new doctors.

Needless to say this has angered many parents.

The nonprofit, Women of Woodlawn, held a rally April 16, where they pleaded for the office to remain open. Kim Furletti, president of the organization, told the Bronx Times that moms and dads are upset and are in disbelief this would happen.

“You’re playing with people’s lives here right in the middle of the pandemic,” she stated. “They don’t care whatsoever about the Woodlawn community.”

According to Furletti, families were completely caught off guard by this news and no idea it was coming. She explained that this is a geographically isolated neighborhood with many people that don’t drive, so getting to the closest pediatrician operated by BCHP in Riverdale or Westchester is not easy.

“They’re still trying to push this narrative that care is only a few minutes away,” she stressed. “Why would anybody want to follow them to a new location?”

Furletti reached out to Assemblyman Jeffrey Dinowitz and Senator Alessandra Biaggi’s offices who discovered that the facility’s lease was up April 30 and the site was deemed not profitable.

Dinowitz attended the rally earlier this month and is disgusted that BCHP would shutter Woodlawn Pediatrics.

Standing with the #Woodlawn community and @womenofwoodlawn this morning to speak out against the closing of General Pediatrics at Woodlawn. I’m disheartened by @BostonChildrens decision to close this office, which has offered such vital services to families in our community. pic.twitter.com/OQIItGyDZL

In April, the Women of Woodlawn launched a petition to save Woodlawn Pediatrics and so far it has garnered more than 1,000 signatures.

“The location of this office, in an area with a higher rate of uninsured residents (25%), as opposed to other areas served by Boston Children’s Health Physicians, begs the question as to the true motivations behind this closure,” the petition states. “Sending this notification solely via email, and only in English, in a community where not everyone speaks English or has internet access is a further disservice to patients. With roughly six weeks notice to both staff and families, many will be left without a provider on April 30.  This aggressive timeline is not enough to ensure this community is being cared for properly, especially during a global pandemic.”

Residents expressed stressed why the facility needs to remain open.

This office has taken care of my children for 16 years with the upmost professionalism, love and attention,” said Michelle Ely. “Not only are they my pediatricians but they are our friends and a huge part of this community. We need this office to remain open and allow these doctors to continue their amazing work taking care of our children.”

“Not only will my sister lose her child’s pediatrician, I find it shameful that this corporation would choose to withdraw its care for an under serviced community, and do it in such a way that many will be left in the dark not knowing what happened to their child’s doctor,” Burke said.

A spokesman for BCHP declined to say why Woodlawn Pediatrics is closing, but stressed that families will still have the opportunity to access care within its network of pediatricians.

“While it is never easy to close an office, this transition gives us the opportunity to integrate our teams so we may strengthen organizational resources and patient care,” the spokesman said. “We will continue providing the highest-quality family-centered care you have come to expect from BCHP.”