Fire engulfs the top of a Fordham apartment building Thirteen families have been displaced after a brutal 4-alarm blaze engulfed the top floors of a six-story apartment building on E. 194th Street in Fordham on Monday, January 29.

The fire erupted around 11 p.m and required 168 firefighters to bring it under control just after 2 a.m.

Only three injuries have been reported, two by firefighters, however none are life threatening.

The fire caused a water pipe to burst resulting in power loss and flooding damage to local businesses on the street level.

Renso Maria opened a tax office on the building’s ground floor the day of the fire.

Alerted to the fire, Maria rushed over to the building at around 11:30 p.m. last night, when he witnessed the damage himself. It wasn’t until Tuesday, January 30 that he could assess the damage to his brand new office.

“Everything was damaged, computers, servers and all. The estimated cost of the damage is $50,000, ” said Maria. “I had 25 people doing taxes yesterday and today I was going to have 25 more.”

He doesn’t expect to be up and running for a while.

Throughout the day families returned to the building to gather personal items but were turned away.

The Red Cross is providing assistance to those left homeless by the fire.

There is no timeline for their return. 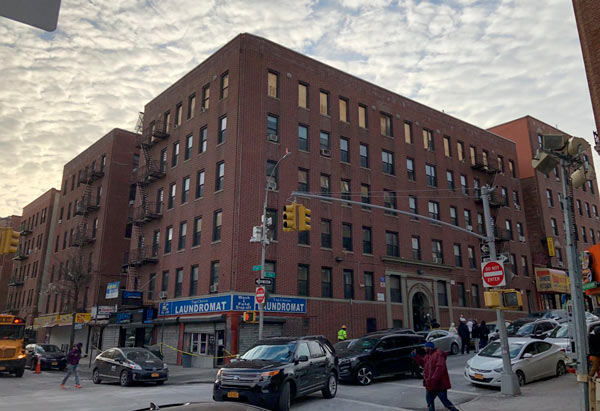 The outside of the burned building on the intersection of E. 194th St. and Briggs Ave. in Fordham.
Community News Group/Alex Mitchell