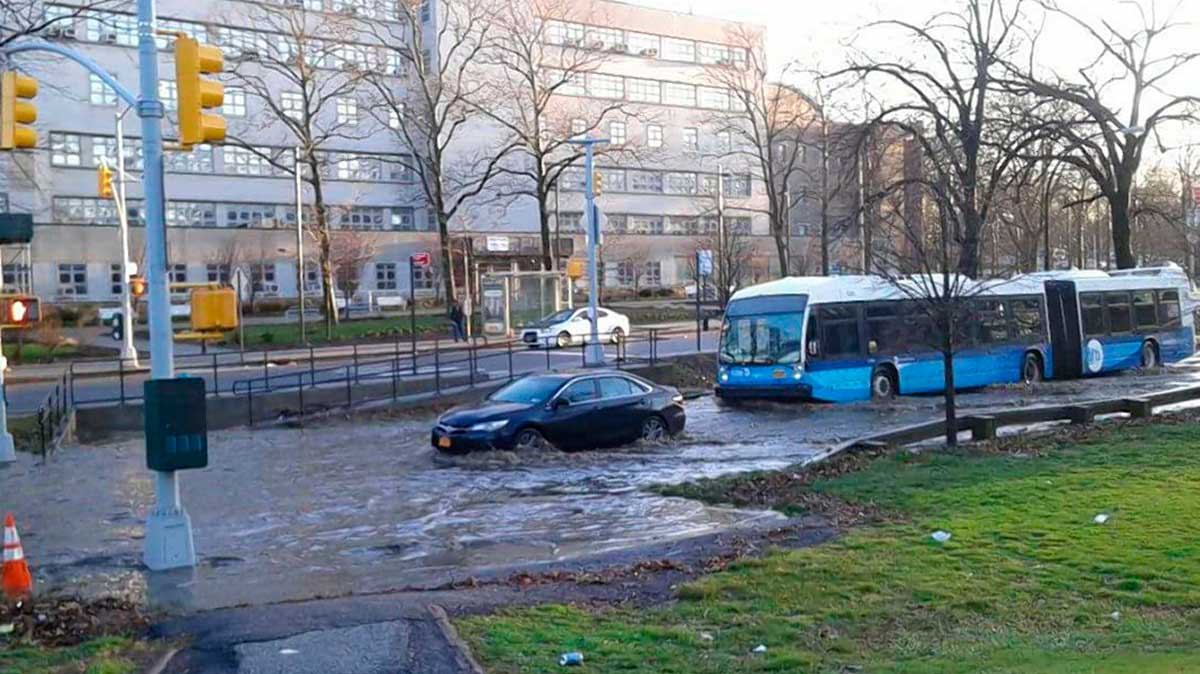 In 2017, major flooding occurred during a large storm along a recently reconstructed stretch of Pelham Parkway that is in front of Jacobi Medical Center. It appears to be an periodically ongoing issue on the parkway.

Parts of Pelham Parkway have undergone major reconstruction, but the roadway is still prone to flooding.

Community Board 11 is concerned that the flooding on some portions of Pelham Parkway this spring is due to a variety of issues including clogged catch basins.

Additionally Bronx House suffered flooding and water damage its CEO said was apparently caused by an overloaded storm sewer connected to the building.

“We were told that these were atypical events and flash flood types of incidents, and I have to agree with that, but in my experience this is unacceptable,” said Warneke.

It is not the first time. Siegel said that the problem got worse, not better, after the completion of Pelham Parkway’s Phase 1 reconstruction, which focused on the parkway’s two southern roadways.

“Every time we have a heavy rain, it is flooded, not only here (on Wallace Avenue) but by Bronx House and by Jacobi,” said Siegel, adding “The flooding was so bad last week that the parkway should have closed.”

Siegel attributes the growing issues to ‘shoddy work’ of the contractor and thinks more after-project repairs are needed.

Warneke said that often twigs and leaves caught in catch basins are the culprit.

Howie Martin, Bronx House CEO, said the catch basin flooding and what appeared to be underground water issues are taking a toll on the non-profit organization.

Since the reconstruction, during heavy rains, water sometimes flows out of the floor drains and toilets at Bronx House, located at 990 Pelham Parkway South, said Martin.

In one recent incident, thousands of dollars worth of damage took place when a floor drain in the kitchen spewed water that completely destroyed a wooden floor nearby in an area used for their senior program, he said.

To date the city has is not willing to reimburse the organization, he said.

“We never had problems with the old sewer lines,” said Martin, who has worked at Bronx House for 34 years.

He added that if the city doesn’t reimburse the organization, they would have to ether raise money or take funds from the organization’s operating budget to replace the floor.

A spokeswoman for the NYC Department of Environmental Protection said the agency periodically pre-inspects infrastructure and catch basins in potential flooding locations before severe storms, and that the flooding on Pelham Parkway on April 16 was due to severe weather.

She added: “Due to the high volume of rain and strong winds, catch basins were inundated with leaves and tree debris. A field operations crew was dispatched during the storm to clear them.” A crew cleared twigs and leaves from storm drains on Pelham Parkway prior to a major rainfall in April.
Photo courtsey of Community Board 11