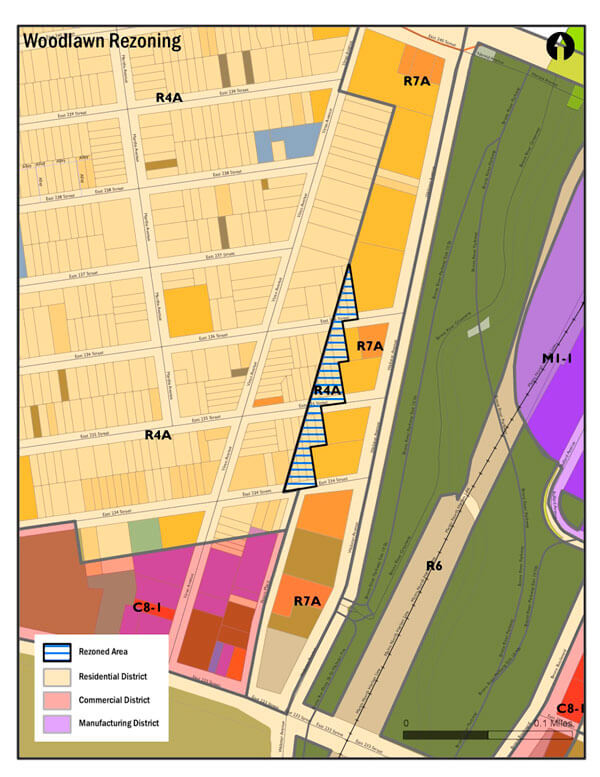 A recent rezoning in the northwest Bronx will compliment a neighborhood’s true identity.

Last month, Councilman Andrew Cohen announced that the NYC Council had voted in favor of and passed a zoning amendment for a portion of Woodlawn Heights, changing the area’s zoning from an R7A District to an R4A District.

The downzoning, which was the city’s first in over two and half years, will result in more one- and two-family detached homes, generally built in R4A districts, as opposed to seven- and eight-story apartment buildings, which are typically built in R7A districts.

Before the downzoning, most of Woodlawn Heights was already an R4A district, with the exception of the Webster Avenue corridor, from East 234th to East 240th streets, as well as the portion bounded by East 234th Street to the north, East 233rd Street to the south, Katonah Avenue to the west and Peter’s Place to the east, which is a small, commercial C8-1 district.

The zoning change intends to provide a framework for orderly growth while protecting the neighborhood’s established residential character, as the previous zoning did not reflect housing stock typically found on residential blocks, such as one- and two-family homes.

The change from an R7A to an R4A district more closely reflects the existing properties in the neighborhood and will protect against future developments that would have been permitted for an R7A district but are now out of scale and out of character for the neighborhood.

“The downzoning of this portion of Woodlawn will stop the destruction of single-family homes that currently give this neighborhood its intrinsic character, as well as prevent high-rise developments from invading its narrow streets,” said Councilman Cohen. “This is something that the residents of Woodlawn have been in support of for quite some time and I am proud to have been able to make it a reality.”

“Our community board was happy to rezone this portion of Woodlawn,” said George Torres, district manager of Community Board 12, who held several meetings with local constituents and elected officials. “This rezoning is the result of careful planning between CB12, City Planning and Councilman Cohen’s office to help preserve what makes Woodlawn a vibrant and close-knit neighborhood.”

“We are delighted that Councilman Cohen and the New York City Council passed this zoning amendment, as it will maintain the current charter of our neighborhood while prohibiting large, multi-family dwellings from being built on our residential streets,” said Kenneth Nugent, president of the Woodlawn Taxpayers Association. “A big thank you to Councilman Cohen and his staff for all of their help.”

“This zoning change is vital to keeping the character of Woodlawn intact,” said Kim Holocher-Furletti, vice president of Women of Woodlawn. “Councilman Cohen’s office has done a fantastic job as an advocate for our community on an issue that is so important to residents and their community.”