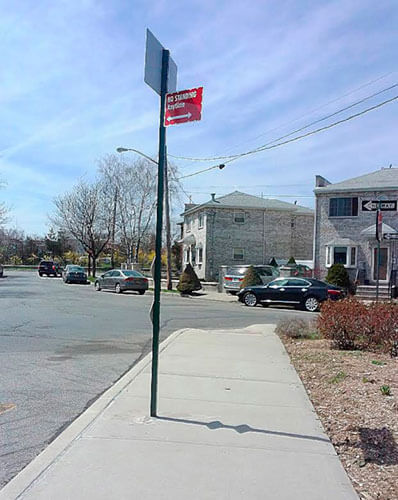 The Rawlins and Kearney avenues traffic triangle’s parking signage has been re-worked .

Recently covered in the Bronx Times, the Country Club Greenstreet triangle’s southern perimeter displayed a single-headed arrow as oppose to its original double-headed version which was damaged, then removed.

Community Board 10, Councilman James Vacca’s office, and the NYC Department of Transportation went to work correcting the island’s signage by re-situating stop signs further up the triangle and on Kearney Avenue as well as replacing the damaged No Standing Anytime sign with the wrong version.

NYCDOT originally claimed the south side was too small to provide parking, but were proven wrong as illegally parked vehicles began appearing there daily, obstructing motorists’ vision as they passed the island.

According to a NYCDOT spokesperson, they were made aware of the sign issue at this location which they repaired via a new sign installation on Friday, April 10.

Following this correction, Michael McNerney, Country Club Civic Association president revealed only one vehicle has been spotted illegally parked at the triangle, which was promptly issued a parking summons.

McNerney has reached out to the 45th Precinct’s commanding officer and thanked the department for their immediate renforcement.

“We’re very pleased that the sign has been corrected by the New York City Department of Transportation and I’m certain that the recent media and political attention that has been brought to this location has further added to the incentive to have the issues here corrected. In the future, we look forward to a more direct line of communication with the New York City Department of Transportation as we work toward continuing to address transportation concerns in the Country Club community,” McNerney expressed.

“My office was instrumental in helping to get this done after residents contacted me about this situation as well as from personally visiting this site to verify their concern. I knew right then and there DOT had to take action in replacing this sign as soon as possible,” Councilman James Vacca explained.

“I applaud both the quickness and efficiency in which the DOT replaced the ‘No Standing Any Time’ sign at Rawlins and Kearney avenues as protecting and ensuring the safety of pedestrians and drivers throughout the Bronx and New York City is critically important. I look forward to continuing to work with the DOT to foster safer roadway designs and reduce traffic collisions in our communities,” Senator Klein stated.

“Community Board 10, working with Country Club Civic Association and the New York Department of Transportation, is happy to note the corrected sign was installed at the Rawlins and Kearney avenues traffic triangle as this will contribute in promoting traffic safety in the area,” Ken Kearns, CB 10 district manager said.

With the traffic triangle fully restored, McNerney explains CCCA and NYCDOT will devote their time toward correcting other traffic concerns in the area.

Chief among them is improving Country Club Road at MacDonough Street.

Currently only one lane of traffic on Country Club Road is permitted to enter the Jarvis Avenue overpass, and according to McNerney this causes a tremendous backup every morning as far as Stadium Avenue.

A proposed resolution is for Country Club Road’s right lane to allow motorists the options of either turning right onto MacDonough or traveling straight over the Jarvis Avenue overpass.