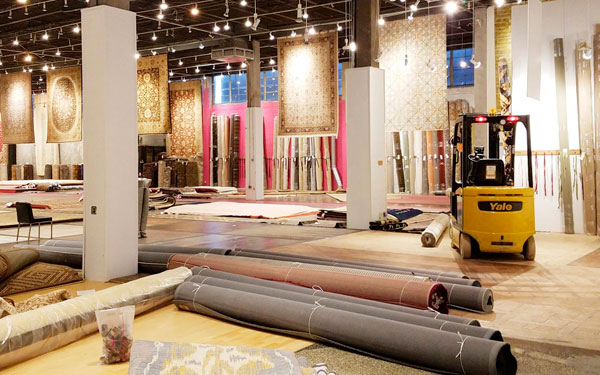 The ABC Carpets and Home warehouse on Bronx River Avenue has closed its doors for good. Employees are packing up remaining inventory as questions about the future of the massive building continue.
Community News Group / Arthur Cusano

The 250,000-square-foot ABC Carpet and Home warehouse, that opened 33 years ago as a discount warehouse for excess product, is being vacated.

Employees worked to pack up remaining inventory and other property for transfer earlier this week behind closed doors.

Supervisors on hand declined to comment on the store’s closing.

The flagship location of the more than century-old ABC Carpet and Home furnishing company on Fifth Avenue in Manhattan will remain open.

A woman at the site who identified herself as the human resources manager confirmed the building itself was owned by ABC, and that its fate was still being discussed.

She directed all questions to company spokesperson Susan Perl at the Manhattan corporate office.

Calls to Perl for comment were not returned by press time.

The warehouse store at 1055 Bronx River Avenue had developed a cult following for its quirky, labyrinth-like layout, customer service, in-store café and most of all, deep discounts on high-end Persian and Oriental rugs and one-of-a-kind furnishings shipped in from the Fifth Avenue flagship location.

Ownership announced it would close the facility for financial reasons earlier this year.

Approximately 60 employees will be laid off.

Marlene Cintron of the Bronx Overall Economic Development Corporation said a buyer for the property has been found and is in the process of finalizing the deal.

While not divulging the buyer she said, “The plan for the future purchaser is a plan that makes good business sense and is an opportunity for Bronx residents to spend more time in that building.”

However, Cintron said the ABC warehouse would be missed.

“I don’t think Bronx residents took advantage of the store as much as they could of and should of,” she said. “They were a great neighborhood resident while they were there.”

Community Board 9 district manager William Rivera also lamented ABC’s closing, as well as the local jobs that would be lost along with it.

He praised the company’s cooperation in community green projects and for the events they hosted on the premises.

“They were really good to the community,” Rivera said. “It’s always sad to see a community partner leave.”

Rivera said he heard rumors about potential new owners for the building, but nothing was concrete.

He was, however, emphatic in what he didn’t want to see built at the location.

“I hope it’s not going to be another storage facility or hotel,” Rivera said. “We have enough of them.”

Rivera said the hotels built in the area are mostly of the short-stay, ‘hot sheet’ variety, which he said have not been good neighbors.

A hotel is already planned for Wheeler Avenue, not far from ABC Carpets, he said.

“And storage facilities don’t add to the tax base and they don’t employ a lot of people in the community,” Rivera said. “We want to see more healthcare, affordable housing and mixed use.”

Councilman Rafael Salamanca said he also did not want another sketchy hotel in the location.

Montefiore Medical Center is rumored to be interested in the property as a new satellite location.

“There is no truth to that rumor,” she stated in an email.

Prior to ABC’s tenure, the warehouse had been part of a large industrial zone, said Bronx County Historian Lloyd Ultan. He said he did not know offhand who the original tenant of the building had been.

“That section near the Bronx River has been used for industrial purposes since the 1920s,” Ultan said.

The property is located in an area that could be affected by tidal wetlands and special flood hazard areas, according to the NYC Buildings Department.

Councilman Salamanca said that ABC Carpets management played a large role in the cleanup of the Bronx River shoreline behind the store, and said he wanted to keep that area public.

“I want to preserve that space and make sure the community has access to that waterfront space,” he said.

A portion of the warehouse was built over the Bronx River, and suffered a significant amount of water and storm damage due to Superstorm Sandy in 2011, according to published reports.