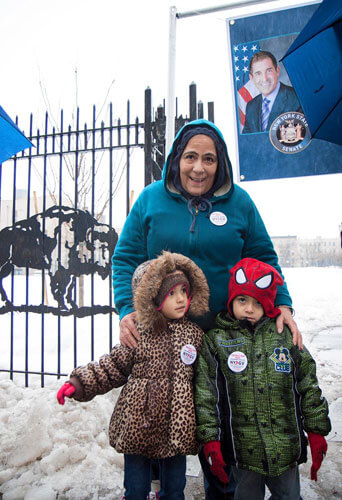 A proposed law by Bronx legislators is taking aim at curbing playground shootings.

“Luisito’s Law,” named after a 4-year-old boy who was shot in the arm this summer while playing at a West Farms, was introduced in the state legislature Wednesday, Feb. 19.

Senator Jeff Klein, Assemblyman Luis Sepulveda, and other Bronx representatives gathered with Luisito’s family at Vidalia Park that day to announce the law, which would increase minimum sentences for anyone who shoots a gun within 500 feet of a park, playground or schoolyard, and for those who shoot kids younger than 10-years-old.

Luis “Luisito” Oyola Jr. was stuck by one of multiple stray bullets during a fight that broke out in the park, on 180th Street and Vyse Avenue.

“We need to get tougher on the dummies that are going around shooting like it’s the wild wild west,” said Lorine Padilla, Oyola’s grandmother. “We need to send a message that is a deterant to them.”

The man who shot Oyola is awaiting trial on assault charges that carry a minium penalty of 1.5 to 4 years in prison. If the law passes, those who shoot a gun in a park could face 3.5 to 15 years, and those who shoot a child under age ten would face a minium of 5 to 25 years.

“This legislation will send a message to criminals that if they bring violence into the lives of these innocent children, they will face serious time behind bars,” said Assembyman Sepulveda.

Sepulveda said this issue is personal to him because he lives in the neighborhood and often goes to that park with his family.

“What if that day it had been me, my wife and our two-year-old child in the park?” he asked.

Padilla described how painful it was to watch the doctors at St. Barnabas digging around in her grandson’s arm to try and pull the bullet out.

“My grandson was being a three-year-old boy when this idiot decided it was ok to pull out a gun and shoot,” she said.

She urged other members of the legislature to pass the bill.

“Luisito’s Law” is part of a recent push to further reduce gun violence in New York. Other efforts that Senator Klein has championed include the NY SAFE act, which tightened gun control, and Operation SNUG, which uses former criminals or gang members to mentor at-risk youth in hopes of reducing violence.

But this proposed law is specifically about keeping young children safe, and the people who harm them behind bars.

“We are not going to allow our playgrounds to become shooting galleries,” Klein said. “If you take aim at our children, we will fire back you.”