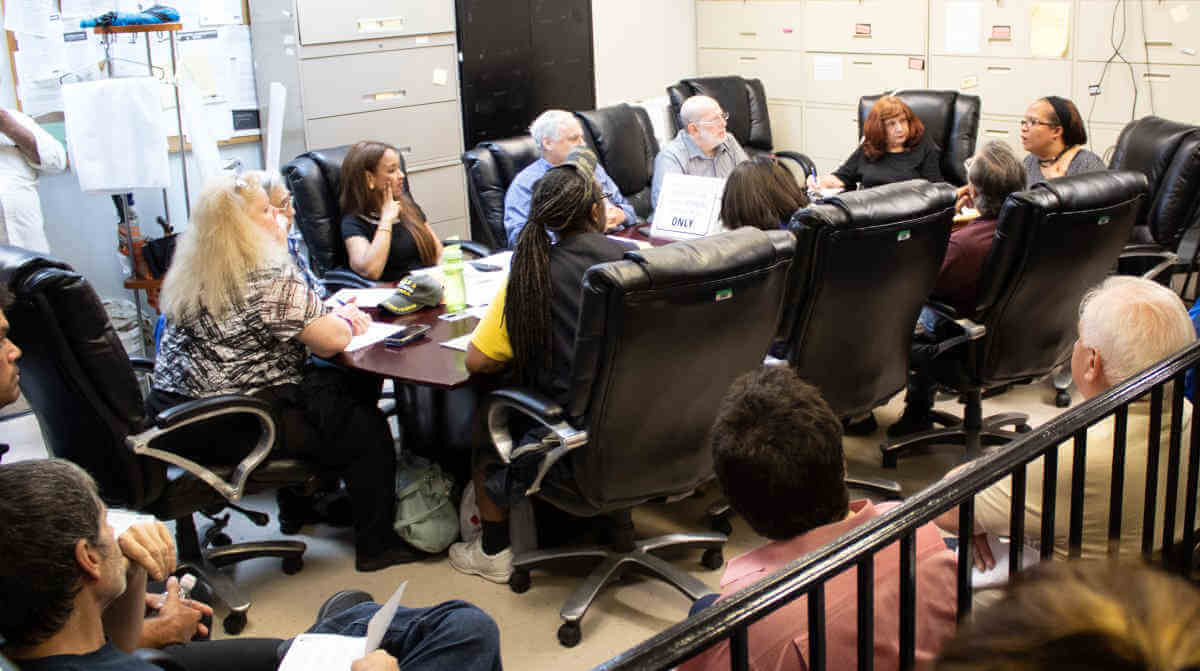 Community members watch, listen, voice their concerns and ask questions at Community Board 10’s Health and Human Services committee meeting on Tuesday, June 18. The comments and questions concerned a possible drug facility on East Tremont Avenue — a idea that was shelved the next day.
Photo by Jewel Webber

A planned drug-counseling program will have to look for a different location.

Carnegie Hill Institute, a Manhattan-based program that expressed interest in purchasing a Waterbury-LaSalle building in a commercial corridor will have to look elsewhere after the property owner announced he would not entertain their offer to purchase the property.

The news came after a Community Board 10 Health and Human Services Committee meeting on Tuesday, June 18 where community members met with a Carnegie Hill representative and a representative of the NYS Office of Alcohol and Substance Abuse Services concerning a siting of the program at 3134 E. Tremont Avenue.

The next day, on Wednesday, June 19, the owner of the property, Dr. Owen Golden, visited Matt Cruz, CB 10 district manager, and told him that he had changed his mind and he was not going to sell the property to Carnegie Hill.

“Dr. Golden told me, (and) asked me to convey publicly, that he has rejected the offer by Carnegie Hill Institute for his property,” stated Cruz. “Dr. Golden also asked me to share that he does not intend on leaving and wishes to provide medical care for the Pelham Bay and Westchester Square community for years to come.”

Golden plans on staying in the community for the next five to ten years, and had only placed his property on the market to determine its worth, said Cruz.

Golden, after initially declining to comment, confirmed he has no intent to sell.

“I am not entertaining any sale at the moment,” said Golden. “That’s the bottom line.”

Mary Jane Musano, a board member who is also the WLCA president, said that the news energized many in the community.

“I left the meeting on a high,” said Musano. “I hope that this makes people feel empowered. If you come together and get knowledgeable and be respectful, you can accomplish what you think you can’t.”

Musano also said that the representative from OASAS proved especially informative in explaining to the community that the state agency doesn’t seek out applicants and that while not mandatory, the state agency expects that any group treating patients through an 822 program usually dispenses medicine, a major sticking point for the community.

Musano said that she was impressed by the amount of information presented at the meeting.

“Think of what would happen to this neighborhood if we weren’t vigilant and all of these programs popped up all over the place,” said Musano.

She is concerned that drug treatment programs that dispense Methadone and other similar medications merely substitute one drug for another, but don’t solve the patient’s underlying substance abuse issues.

Andrew Chirico, another WLCA leader, said he opposed the Carnegie Hill idea because he believes that clinical settings such as those at hospitals are a more appropriate location to do drug counseling and treatment.

Calls to Carnegie Hill weren’t returned as of press time.