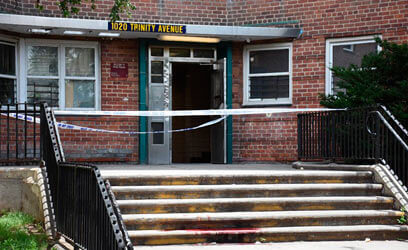 Police roped off the entrance to the Forest Houses complex after an unidentified man committed suicide last week.
Photo by Edwin Soto

Police are investigating an apparent suicide at the Forest Houses complex.

According to police, an unidentified 21-year-old man plummeted from the 14-story building on Saturday, July 8 at 9:15 a.m.

The victim jumped from the housing project’s roof.

Officials stated that a small rubbish fire flared up on the building’s top stairwell landing about the same time the man jumped.

Police are investigating if the suicidal man, who died at the scene, ignited the fire before taking his life.