Part of Shore Road is prone to flooding, and in winter, the water can freeze and create hazardous driving conditions.
Photo courtesy of James Breen

A local civic group is reaching out to city agencies to improve hazardous situations.

The City Island Civic Association’s board penned a letter to three city agencies about an array of road conditions in Pelham Bay Park: flooding on Shore Road between Bartow Circle and the county line, street lights that do not work, potholes and lack of permanent deer crossing signs.

The civic group wrote the NYC Parks Department, Department of Environmental Protection and city Department of Transportation after a short film about the dangers of traveling on Shore Road, made by filmmakers James and Tommy Breen, garnered widespread attention.

“When we call 311, write letters, and make phone calls to ask that these problems be fixed, we are usually told that the problem resides with one agency or another, but nothing happens,” stated the CICA letter, adding “It seems clear that interagency collaboration is required to address each of the…problems.”

The letter expressed concerns about streams of water running into the roadway at several locations on Shore Road, along with many potholes along that road and elsewhere in the park.

According to a recent informal survey, dozens of lights in Pelham Bay Park.

It is difficult to make 311 reports about outages of lights because oftentimes the access roads to City Island and those elsewhere in the park have no addresses, said CICA first vice-president Fred Ramftl.

“I have been reporting issues with lights in the park to 311 for the past two or two-and-a-half years,” said Ramftl. “A lot of the street names are not in the city computers.”

Orchard Beach Road also is prone to deer crossings, making for dangerous conditions, added Ramftl, who said that street lights along that road are also frequently hit and knocked downed by vehicles.

Lighting in the park has been a stubborn safety concern for a couple of years, said John Doyle, a CICA board member.

On Shore Road, motorists sometimes even have to drive into the oncoming traffic lane to avoid flooding or ice on the roadway, according to published reports

A spokeswoman for Mayor de Blasio’s office said that the city has received six complaints about Shore Road in the past year, and has responded aggressively.

“The Department of Environmental Protection has determined that natural water seepage from underground is likely leading to the deterioration,” stated the City Hall spokeswoman of Shore Road. “The Department of Transportation will continue road maintenance to make sure potholes are filled, and agencies will collaborate on a more long-term solution to the problem.”

The spokeswoman also stated that DOT is aware of concerns regarding lighting in this area of the Bronx and is already working on repairs.

Councilman James Vacca recently was able to procure a temporary electric message board warning of deer that was placed in the park by DOT in December 2015.

As of yet, no permanent deer crossing signs have been placed in the park by the city, sources said. 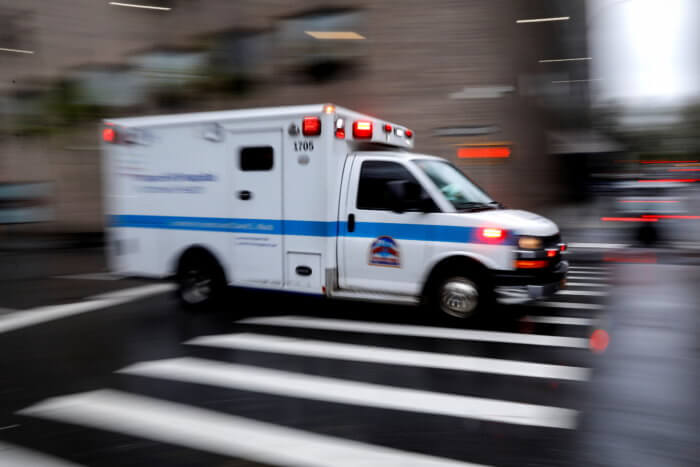