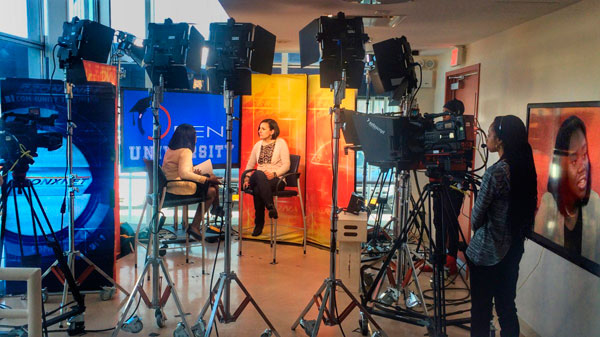 BronxNet, the public access cable TV network in the borough, released the third episode of a new program ‘Open University’ this past Tuesday.

This show is one of several new programs that are being launched out of BronxNet East at Mercy College.

The program, produced entirely by college students pursuing careers in media and communications, will focus on issues that students care about.

“They choose what to report on,” said Michael Max Knobbe, executive director of BronxNet, “Students in our borough need a voice.”

While students prepped the set, filmed, and interviewed the guests, Knobbe stood back and watched but didn’t get involved at all, letting the students produce the entire segment completely themselves.

In honor of Women’s History Month, the guests on Tuesday’s show were Lynn K. Hobson, a hip-hop publicist, and Marisa White, the director of creative services at BronxNet.

“If you have a goal and one option doesn’t work out, make a list of everything else you can do to create that same outcome,” said Hobson.

Each student on set had their own story to tell and their own reason for becoming a part of the BronxNet family.

For instance, Nicole Iarossi is a veteran. No, not of BronxNet – she was in the U.S. Army and served in Afghanistan for 10 months in 2004.

While trying to lift a 69-pound weapon by herself (usually a two-man lift) Nicole blew out her back and ended up needing shoulder surgery.

“It’s nothing compared to what happens to other people,” said Nicole, with earnest humility.

When she got back to the states, Nicole was determined to finish her journalism degree.

She needed an internship to graduate, and had been accepted to intern at ‘Good Day New York’.

However, as a mother and a student Nicole wasn’t able to meet the demands of the network so she decided to intern with BronxNet.

“At the time I was so upset,” recalls Nicole, “But now I really believe everything happens for a reason. At Bronxne I’m not filing papers or fetching coffee – on my first day they were like ‘here- take the camera’”.

By comparing the first show she packaged to the ones she works on now, Nicole sees her exponetnial growth and credits it all to the hands on learning she got through the program.

Today, she has just one more class until graduation, and has already taken her LSATS for law school.

Some other new TV shows coming out of BronxNet East include Bronx Buzz, a show featuring local journalists each week, and Family Voices, dedicated to families of the borough.