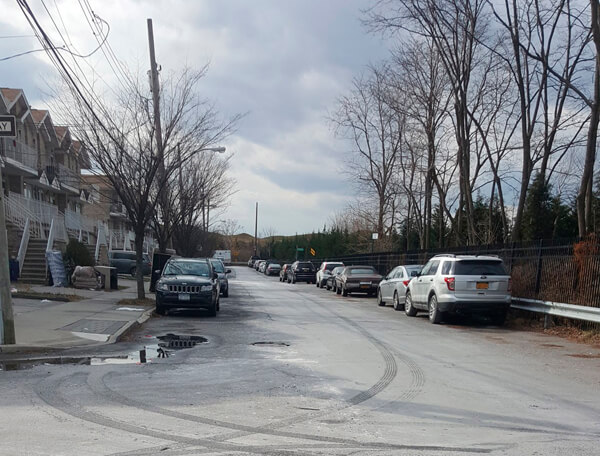 A portion of Miles Avenue, including the stretch between Robinson and Emerson avenues, may soon be affected by alternate side parking.
File

According to Community Board 10 and other city agencies, a new plan involving alternate side parking and street cleaning may soon be implemented in Throggs Neck, after the plan request was submitted to the board by the NYC Department of Parks & Recreation and NYC Department of Sanitation in November.

The streets that will be affected by this plan include Miles Avenue between Balcolm and Emerson avenues as well as Emerson Avenue between Miles and Schurz Avenue, two stretches which border the eastern portion of Trump Golf Links at Ferry Point.

According to Parks, the request was submitted to the board in an effort to maintain the perimeter of Trump Golf Links.

The plan would enable DoS to send a mechanical street sweeper through once a week, plus aide in unhindered access to the area for cleaning and weed whacking weekly.

Alternate side parking would take place on the park sides of the selected streets on Mondays from 9:30 to 11:30 a.m. only.

“Before we (CB10) make a decision regarding alternate side parking on these particular streets, we want to ensure that the residents who will be most affected by this will have the opportunity to express their opinions about it,” said Martin Prince, chairman of CB 10.

“There was never any protocol for cleaning on these streets – and before there is, we want to give residents in the area enough time to voice their thoughts on whether they support it or not,” Prince added.

CB 10 will hold a discussion on this topic at their Municipal Services Committee meeting on Tuesday, February 28 at 7:30 p.m. at their office, prior to voting on the request at a later date.

Many residents who live on these streets are not in support of the plan.

“It’s a very bad idea – there’s no reason for it,” said a resident who has lived on Miles Avenue between Emerson and Hosser avenues for ten years.

“I actually was glad that there was no alternate side parking when I first moved here – but if this plan is approved, that is not good news,” said a resident who lives on Miles Avenue between Hosmer and Robinson and whose family has three cars.

An Emerson Avenue resident also expressed her displeasure with the plan, bringing up the fact that the street’s angle parking spots bordering the park (between Miles and Schurz avenues) would be eliminated for two hours each week.

“A lot of people on this block work during the day so this might not effect them so much, but it’s a big deal for those who are home all day. We’ve never had to deal with alternate side parking, which could be difficult to get adjusted to.”

There are several dozen angled parking spots on the park side of Emerson Avenue between Miles and Schurz avenues.

Nearby Trump Golf Links at Ferry Point declined to comment on the new plan.