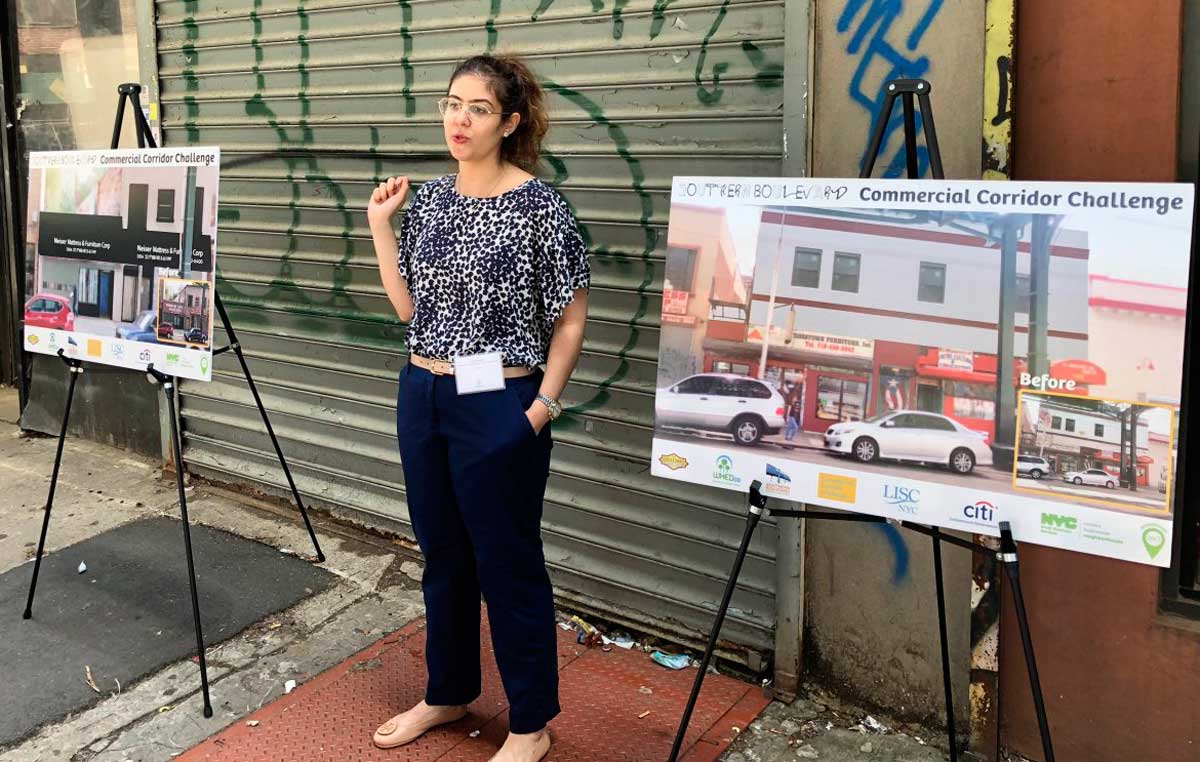 A chunk of Southern Boulevard that has been affected by an ongoing construction project is getting a bit of a facelift.

Focusing on small business near the Freeman Street IRT, these ‘mom and pop’ shops are being reintroduced and revamped in new, innovative ways to showcase the best of the small business strip.

“There is a vibrant commercial corridor here, with many longtime business owners. We know there is an opportunity for new, local entrepreneurs to come and open up shop here,” said Yesmin Vega, senior program manager for community development at the Women’s Housing and Economic Development Corporation (WHEDco), which is the backbone of the revitalization.

WHEDco along with its partners introduced two new initiatives to combat the disruptive street excavating, which is anticipated not to end until the summer of 2019.

Both are coming as part of The Commercial Corridor Challenge program (Corridor Challenge); which was created to support small, locally-owned businesses ,in rapidly changing neighborhoods in the city.

The first is a ‘way-finding’ campaign which aids in flagging down foot traffic to local merhcants.

The way-finding installation follows a Vendor Pop-Up Market that WHEDco organized last summer as part of the Corridor Challenge to meet local retail needs and bring visibility to entrepreneurs in the area.

Coming after a plethora of data research was collected, WHEDco is now in the process of implementing painting and façade improvements with local businesses as part of the program, targeting the blocks nearest the IRT train station.

Eddie Maldonado’s furniture store is one of the businesses receiving the façade improvements. “Shoppers don’t have enough parking because of the construction. Even I struggle with it now,” said Maldonado. “This facelift will make our stores much more presentable to people walking by and will help offset the construction,” he added.

Vega sees these improvements as a way to restore the corridor’s vibrancy.

“The bottom line is that there is a community here and that people care about their community,” said Vega. “We aim to foster foot traffic and bring in new retailers to foster this great community,” she added.

The final stages of the gas and waterline construction will be to repave and smooth out the jagged portion of Southern Boulevard in a way that Vega called ‘visually beautiful.’

It will also free up much-needed parking to support businesses like Maldonado’s.

In an ideal world, over the next five years Vega would love to see more door-to-door retail move into the area.

“We know the entrepreneurs are out there and we know our retail needs. The supporting numbers are out here,” said Vega.

Her research found that approximately $168 million is being spent in the surrounding areas on retail, and that those dollars could be spent on Southern Boulevard.

In particular, reseach indicates both a want and need for clothing stores as well as sit-down restaurants in the corridor.

“The demand is there for creative restaurants and much more, there’s a great mix of cultures in the area and this is a corridor that can thrive,” Vega said.