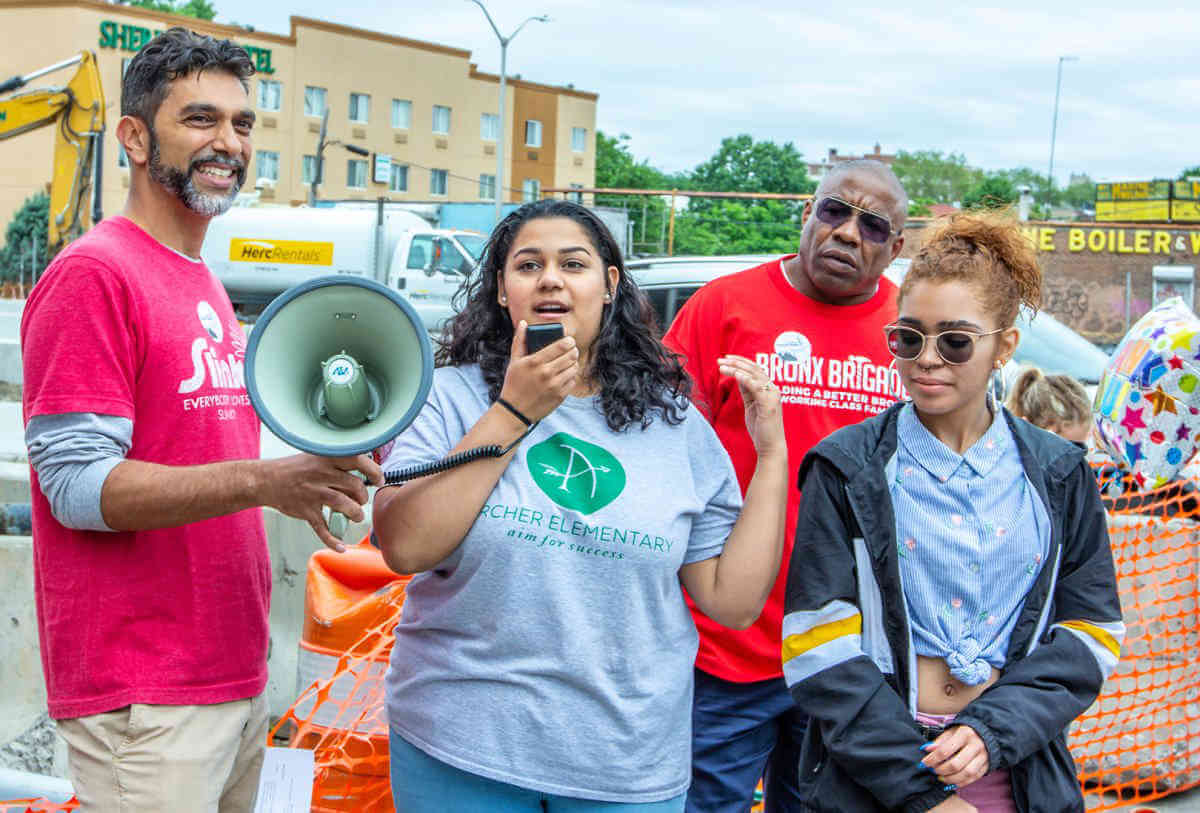 Car horns were honking and plastic buckets were converted into makeshift drums as Longwood Avenue and Southern Boulevard residents rallied to protest the area’s proposed rezoning outside of Fannie Lou Hamer Middle School at 1021 Jennings Street on Thursday, June 13.

Anxious about displacement that could follow a potential rezoning, residents marched and voiced concerns over what they described as a lack of transparency with the NYC Department of City Planning-lead rezoning process that “marginalizes voices like theirs.”

Specifically, it will focus on the surrounding Bronx River waterfront near Starlight Park, which will have easier pedestrian access from the New York state-approved conversion of the Sheridan Expressway into a street-level boulevard.

Residents and protestors fear that rezoning nearby auto body shops and other industrial-like businesses would bring in large, market rate luxury housing that would create displacement in the neighborhood, keeping locals out of the loop during the process.

“As DCP proceeds with a major neighborhood study and rezoning around Southern Boulevard, of which nine of ten community members know little to nothing, they are missing the opportunity to work collaboratively with the community in a transparent process,” said Kerry A. McLean, vice president of Women’s Housing and Economic Development Corporation.

As a way to help the ‘mom and pop’ stores remain afloat along Southern Boulevard, WHEDco previously launched a commercial corridor ‘touch up’ initiative that gave small businesses a much-needed facelift near the Freeman Street IRT station.

“We’ve seen how detrimental (rezoning) can be to low-income residents and small businesses when the government’s process doesn’t fully take their vision and needs into account,” she continued.

The local unions, organizations and others are calling on DCP and the city to consider “an independent assessment of direct and indirect displacement, including standards for what is unacceptable and metrics for changes to ownership, control, and wealth, real workforce and economic development, including apprenticeships and local hiring provisions, and protections and support for businesses owned locally by people of color,” along with protections for industrial, auto and manufacturing spaces in addition to more permanent forms of affordable housing.

“There are easy solutions to these issues like real community input and involvement, but the city speeds through the process, and doesn’t focus attention or investment where it could matter the most,” she continued mentioning that its imperative for DCP to slow down and rethink its procedure with the study and potential rezoning.

Although, according to DCP, “the study will allow the city to coordinate across all agencies and use every tool at its disposal to protect tenants.

There is no firm timetable yet for a DCP verdict on the corridor yet.