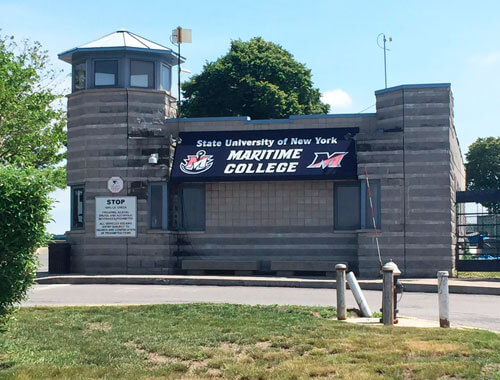 Officials from SUNY Maritime College are working with the Schuyler Hill Civic Association on an issue that has arisen with students parking cars on local streets.
Community News Group / Patrick Rocchio

Residents along Pennyfield Avenue and SUNY Maritime College officials are trying to solve a parking dilemma effecting local streets outside the college.

Students from SUNY Maritime in Throggs Neck have been storing their vehicles along Pennyfield Avenue and its side streets, taking up scant parking spaces usually occupied by residents’ vehicles.

The cars are legally parked, but nevertheless the college, Schuyler Hill Civic Association, and Senator Jeff Klein and Assemblyman Michael Benedetto are looking to find alternative parking arrangements for these students for the next academic year starting in September.

The problem has gotten steadily worse over the past three years, with the 2014-2015 academic year especially inconvenient for community members, said Michael Kenney, SHCA president.

“I can walk if I have to; it is inconvenient, but I can do it,” said the civic president of parking far from his home. “But a lot of our older folks, our seniors, they just cannot.”

Some residents have student cars parked in front of their home for a week at a time, necessitating parking on Schurz Avenue near the Throgs Neck Little Leauge fields, a quarter mile away, explained Kenney.

SUNY Maritime officials attended a Monday, May 18 SCHA meeting, and Kenney added that the college has done everything that they said they would do for the residents, including sending letters to underclassman students asking them not to bring their cars to school.

“Their problem is that Maritime has no way of enforcing the students not bringing their cars,” he said.

Mary Muecke, SUNY Maritime executive director of external affairs, confirmed that the campus met with Community Board 10 and SHCA recently to discuss this issue.

“We are in constant conversation with our neighbors and are trying to see how to properly resolve this issue,” Muecke said. “At the beginning of each semester, the dean informs our students to be generous to neighbors by parking in regulated areas and not in private parking areas or driveways.”

Pennyfield Avenue is a public street and this concern is not new, she said.

SUNY Maritime College provides parking to upperclassmen, commuting students and its employees. The campus has over 700 on-site parking spaces and disributes 800-plus parking permits. Students pay $100 a semester to use the spots.

Some upperclassmen and commuters park on the residential streets because they refuse to pay the parking fee.

The college is exploring the possibility of building an on-campus parking garage when it updates some of its older dorms, but that is a long-term plan and will not resolve the current situation.

“This has been going on for quite awhile and it seems to be getting intense lately,” said Assemblyman Benedetto. “I’m very sensitive to both the plight of the residents who have nowhere to park near their homes as well as with the SUNY Maritime College students who need somewhere to park their cars.”

According to Benedetto a proposal has been made to possibly convert a parcel of land located across the street from Bicentennial Veterans Memorial Park and running alongside Throgs Neck Expressway into a parking area exclusively for SUNY Maritime College students to park their vehicles.

In addition, this proposal would also have SUNY Maritime College establish their own shuttle bus service to transport their students to the campus, provided the college agrees to the proposal.

Benedetto’s office has been in contact with the state Department of Transportation to see if the roadside parking proposal is doable.

A spokeswoman from Senator Klein said that his office has been working on the issue since last fall, and has made several short and long-term proposals to address the parking issue.