‘It’s no time to get cocky’: Cuomo says COVID-19 improvements could only be temporary 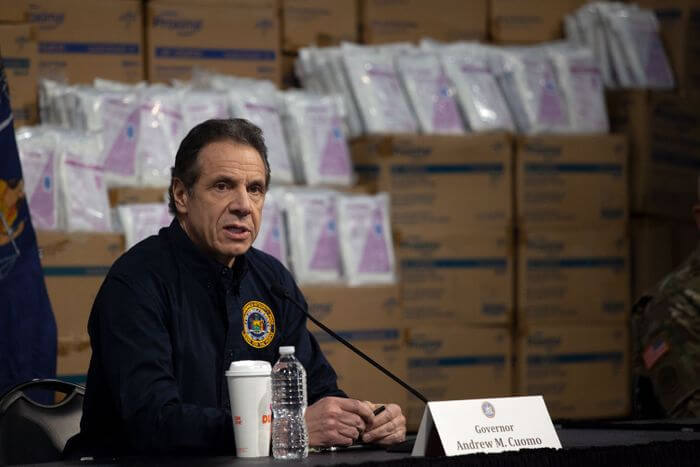 Gov. Andrew Cuomo speaks about getting medical supplies to combat the coronavirus during a press conference at the Jacob Javits Center, March 24, 2020. (Photo: Ben Fractenberg/THE CITY)

Governor Andrew Cuomo reported on Sunday further decreasing numbers in hospitalizations and deaths from COVID-19 — but once again issued a warning that this progress can be overturned by carelessness.

Overnight, there were 507 deaths across the state, which may be considered a far cry from the fatalities at its height which reached 806 in a 24-hour period just two weeks ago.

“The recent news is good, we’re on the other side of the plateau and the numbers are coming down. And it’s only good news only compared to the terrible news that we are still living with which was that constant increase. Remember, we still had 1,300 people walking into the hospitals yesterday testing positive,” Cuomo said on April 19. “It’s no time to get cocky… It’s only halftime.”

Cuomo was in agreement with President Donald Trump, who tweeted Sunday morning that governors need support if they plan to expand testing on a widespread basis. But earlier in the press conference had warned that the government needs to produce a consistent message to the public if it is to maintain confidence in the eyes of Americans.

Just like I was right on Ventilators (our Country is now the “King of Ventilators”, other countries are calling asking for help-we will!), I am right on testing. Governors must be able to step up and get the job done. We will be with you ALL THE WAY!

“I agree. That’s called partnership,” Cuomo said in response to the tweet. “It’s important that government sends the right signal and one message, and there’s no confusion. Because if we don’t have confidence in government right now, if they think there’s chaos, confusion or politics that would be a terrible message to send… Now is not the time to send mixed messages.”

Trump and Cuomo have not had a steady relationship throughout the crisis as the federal government has been cautious to send supplies, funding, and most controversially, ventilators. The president has been critical of Cuomo’s efforts to obtain up to 40,000 ventilators prior to the state’s apex which was projected to call for doubling the hospital capacity in New York.

The apex, however, has followed a different route than many projections – which were all catastrophic.

Mayor Bill de Blasio, in his Sunday morning press conference, said this was a result of New Yorkers following social distancing guidelines from the government as there is no vaccine or specific treatment for the respiratory illness.

Cuomo said New York is now offering to send 400 ventilators to Massachusetts at the request of Governor Charlie Baker, who is assessing the commonwealth’s personal need. According to Cuomo, these units are already set aside and ready to ship within 24 hours.