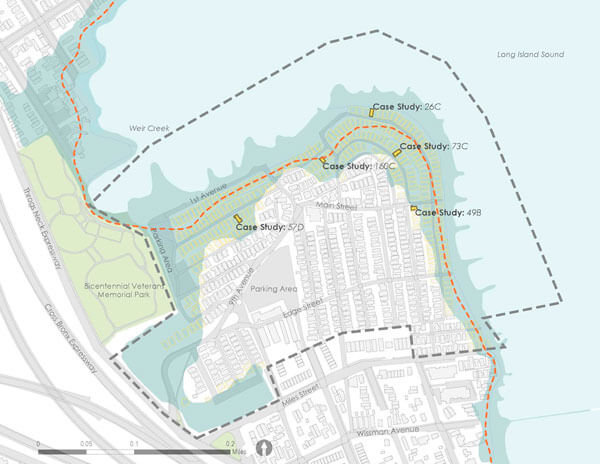 This map depicts the study area and the extent of the floodplain within Edgewater Park.
Photo courtesy of New York City Department of City Planning

A Throggs Neck waterfront neighborhood is the subject of a report addressing ways to fortify such communities against Mother Nature’s fury.

The Department of City Planning released its Resilient Neighborhoods initiative report for Edgewater Park on Thursday, October 29 which is the outcome of two years of study in partnership with local stakeholders and recommends ways to address the dangers facing waterfront neighborhoods.

Resilient Neighborhoods is a place-specific planning initiative led by DCP in collaboration with communities to identify locally-based strategies supporting the continued vitality and resiliency of ten communities located in the city’s floodplain, one of which includes Edgewater Park.

DCP said Edgewater Park was selected due to the high flood risk it faces for its unique building typology and vulnerable location on the Long Island Sound.

The neighborhood’s location and elevation makes it susceptible to flooding not only during hurricanes or major storms, but also during typical storms.

The city’s work in Edgewater Park has three major goals such as reducing flood risk by enabling buildings to withstand flooding and other hazards while minimizing disruption to residents by updating the Edgewater co-op bylaws to allow for flood resilient construction and investment, planning for adaptation over time by updating the community on current and future climate risk and providing a menu of targeted resiliency measures for residents to protect property and life safety and ensuring that resilient development coincides with the community’s unique character.

According to DCP, this report is consistent with the citywide OneNYC commitment to creating a more resilient city.

The Edgewater Park Cooperative previously mandated the maximum height of any house could be no higher than 25 feet above the Bronx Datum or 27 feet above grade which did not allow for the elevation of structures to FEMA-compliant levels.

Ronald Rauch, Edgewater Park Cooperative second vice president and licensed engineer, said presentations and workshops with FEMA, DCP and the Mayor’s Office of Resilience and Recovery about flood risk and resilient design standards saw the co-op vote to amend its bylaws allowing for building height to be measured from the design flood elevation while maintaining its 25 foot height limit and enabling homes to elevate to the new standards.

“DCP is very knowledgeable and they were opened to listening to our community’s unique issues and willing to come up with solutions to best address them,” said Rauch. “DCP spent a considerable amount of time reviewing our co-op bylaws and took them into serious consideration when working on these amendments. They weren’t trying to force a square peg into a round hole.”

DCP collaborated with residents in the amendment of their co-op bylaws to allow for the elevation of homes and required streetscape mitigation strategies which preserve the neighborhood’s character.

The land Edgewater Park sits on was initially built as an estate where lots were rented as summer campgrounds, however in the 1920s these lots became home to summer bungalows which were transformed into year round residences.

The community is built out to the water’s edge with a small concrete promenade separating the first row of homes from the Long Island Sound.